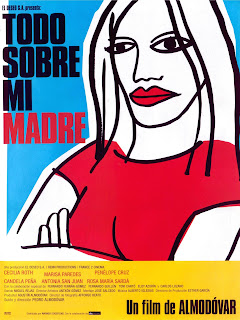 Pedro Almodvar directed this story of a woman and her circle of friends who find themselves suffering a variety of emotional crises. Manuela (Cecilia Roth) is a single mother who has raised her son, Esteban (Eloy Azorn), to adulthood on her own and has come to emotionally depend on him. One night, Manuela and Esteban take in a production of A Streetcar Named Desire; after the show, Esteban is struck and killed by a passing motorist as he dashes into the street to get an autograph from Huma Rojo (Marisa Paredes), who played Blanche. Emotionally devastated, Manuela relocates to Barcelona in hopes of finding her ex-husband (and Esteban's father), who is now working as a female impersonator. Manuela becomes reacquainted with old friend La Agrado (Antonia San Juan), a transsexual, and is introduced to Sister Rosa (Penélope Cruz), a good-hearted nun who has to contend with her considerably more cynical mother (Rosa Mara Sard). While looking for work, Manuela becomes acquainted with Huma Rojo. Huma, on the other hand, has troubles of her own, most involving her drug-addicted significant other, Nina (Candela Pea). Displaying Almodvar's trademark visual style and a unusually strong sense of character-driven drama, Todo Sobre Mi Madre/All About My Mother received a highly anticipated theatrical run in Spain before winning the Best Director award at the 1999 Cannes Film Festival in 2000, Almodvar would receive the Academy Award for Best Foreign Language Film.